Over the upcoming weeks, we’d like to share some survival stories with you, some dating back over a century! Have you heard any stories about the 1906 San Francisco earthquake?

In April of 1906, a massive earthquake lasting under a minute shook San Francisco. Along with the fires it ignited, the damage altogether destroyed almost 500 city blocks. Around 3,000 people died in the disaster and 400,000 residents were left homeless.

Survivors faced weeks of hardship, sleeping in tents and cooking on the streets, and relied on aid from around the city to survive. But although this earthquake is considered one of the worst natural disasters in U.S. history, the world was able to learn from some of the survival stories.

Take Ansel Adams, for example. As an internationally recognized photographer and conservationist, he was also a prolific writer and lecturer. 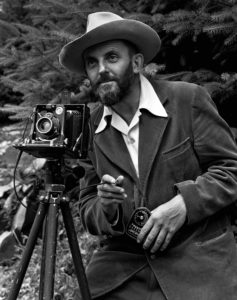 He was only four years old in 1906. His father had moved the family to the sand dunes along the western coast, to take advantage of the healthy, sea air. It was 5:15 in the morning of April 18 when Ansel and his nanny were woken up. Below is what he later wrote about the incident:

“Our beds were moving violently about… The roaring, swaying, moving, and grinding continued for what seemed like a long time; it actually took less than a minute. Then, there was an eerie silence with only the surf sounds coming through the shattered window and an occasional crash of plaster and tinkle of glass from downstairs… My closest experience with profound human suffering was that earthquake and fire.”

Ansel ended up breaking his nose against a brick wall, when a sudden aftershock caused him to stumble.

Parts of his parents’ home were damaged, along with the greenhouse. Thankfully, everything was repairable and no lives in his family were lost. But over the next few weeks, Ansel along with everyone else in his community suffered the shock of losing so much—some more than others.

In looking back at disasters like this, it’s impossible to know what would have saved some of the lives that were lost. We can only do so much to prepare. But if you’re interested in raising your chances of survival should an earthquake happen in your region, we’re here to supply you with all the emergency supplies you’ll need!

-Article contributed by Sophie Wooding – Avid gardener and cyclist in Victoria, BC and Content Writer for Frontier.io