Did you know that roughly 90% of all earthquakes occur along the Ring of Fire?

The west coast of BC makes up just one section of the Ring of Fire, which stretches for 40,000km from the southern tip of South America, up along the coast of North America, across the Bering Strait, down through Japan, and into New Zealand.

Because BC’s west coast is included in some of the most seismologically active locations on earth, it’s a good idea to have some knowledge of how to prepare for earthquakes. This can simply mean purchasing an earthquake kit, or getting to know your area and the emergency management services nearby, especially pertaining to earthquakes. 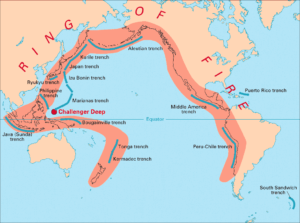 If you’re in western British Columbia, these would include…

If you’re eager to make a difference, you could also help spread awareness and knowledge, and take part in protecting your greater community. Here are some ideas to get you started:

Basically, one of the best things you can do is get people talking about earthquakes, and spread the knowledge. You can refer people to the resources listed above, or other resources you may already know. It’s a beautiful place, here at home in the Pacific Ring of Fire, but it can also be a dangerous place, if you’re not prepared.

-Article contributed by Sophie Wooding – Avid gardener and cyclist in Victoria, BC and Content Writer for Frontier.io